“This new robot will give scientists and the Park unprecedented opportunities to study Yellowstone Lake,” said GFOE President Dave Lovalvo. “With its high-definition video cameras and sampling capabilities, researchers will be able to obtain information about this unique environment that, in the past, has been very difficult to access. The Park doesn’t have this kind of underwater capability, and that’s why we want to help.”

GFOE hopes to fund the construction of the robot directly through the public using the crowdfunding service Kickstarter. Crowdfunding is a popular way to raise money for projects over the internet, by asking for small individual donations from a large number of people. “ Getting the public involved is a fitting approach when you consider the words engraved on the Roosevelt Arch at the entrance of the Park,” said Lovalvo. “It says, ‘For the Benefit and Enjoyment of the People’.”

The bottom of Yellowstone Lake is a unique environment with formations similar to the hydrothermal features that draw millions of visitors to Yellowstone Park each year. “There are hydrothermal vents in the Lake that host unique microscopic organisms that could have beneficial applications to human health,” said Lovalvo. Scientists believe that because these organisms live in temperatures comparable to those inside the human body, analysis of their physiological processes could to lead to more effective treatments for cancer and other devastating human diseases.

Lovalvo is one of the few people to have worked with robots in Yellowstone Lake. In 1985, he designed, built, and operated the first vehicle used for exploration and scientific research in the Lake at depths greater than what was possible with standard diving techniques. “Yogi” is intended to replace the aging and outdated robot that has been used to study the Lake for more than 30 years.

“Yogi” will be built using scaled-down versions of technology that GFOE engineers have developed to study the bottom of the oceans. Through their partnership with NOAA’s Office of Ocean Exploration and Research, they build and operate remotely operated vehicles (ROV’s) capable of exploring the ocean at depths of up to 3.7 miles. The group was recently credited with helping to discover the octopus that many have been calling ‘Casper’, using the Deep Discoverer ROV on NOAA Ship Okeanos Explorer.

GFOE is looking to raise $100,000 to purchase high-definition cameras, a robotic sampling arm, and other components needed to build the robot. The Kickstarter crowdfunding campaign will be active until May 4th.

← Read Our Reddit: Ask Us Anything!
Underwater Robots Contribute To First Protected Area In Atlantic → 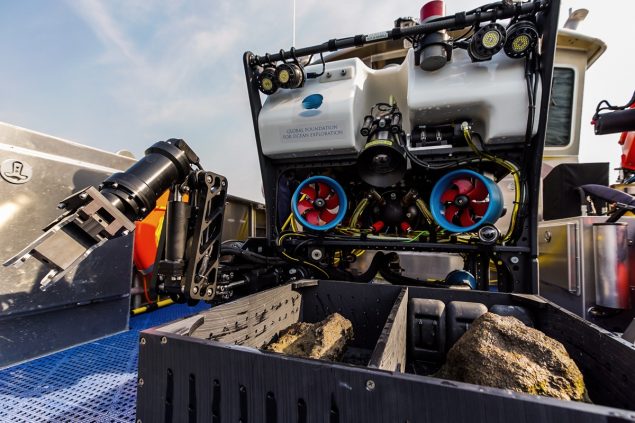