Two GFOE team members recently had the opportunity to talk with students about the value of ocean exploration at the University of Otago and the Dunedin Space Programme in Dunedin, New Zealand.

Annie White and Caitlin Bailey, who both work as GFOE videographers in support of NOAA’s deep ocean exploration missions on the Okeanos Explorer, shared some of the discoveries made on two expeditions in the central Pacific this year.

“One of the professors said that she had never seen so many students ask questions after a seminar before,” said Bailey. “A lot of the students said that they found the seminar to be very inspiring.”

Annie and Caitlin were also invited to a science club for kids that focuses on astronomy. They happen to be discussing astrobiology and potential life on Europa, so they showed the students videos of the ‘alien’ lifeforms of the deep ocean. Afterwards, the students made their own ‘aliens’ out of clay and a lot of them were inspired by the videos.

This is just one example of how the Global Foundation for Ocean Exploration is helping to make the ecosystems of the deep sea accessible to the rest of the world. 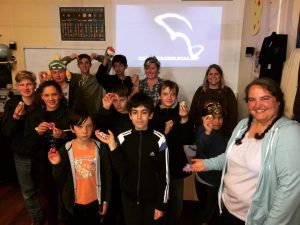