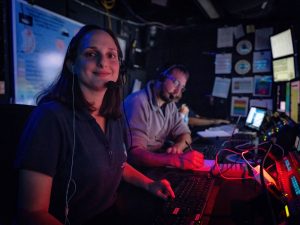 Emily Narrow is a video producer and editor whose work focuses on science and nature. She earned a Bachelor of Arts degree from Oberlin College where she double-majored in Biology and Cinema Studies. She also holds an MFA degree in Science and Natural History Filmmaking from Montana State University. She was a video producer for a production company in Washington, D.C. for three years, where she made public service announcements, ad campaigns, and promotional videos for non-profit and environmental organizations. For the past 10 years she has been a freelance video producer, creating videos for clients such as the National Park Service, NOAA, Montana State University, and Zero Point Zero Productions. Recently she co-edited six half-hour episodes of a broadcast documentary series about Yellowstone National Park for VisionHawk Films. Since 2016 she has been sailing onboard the Okeanos Explorer for the Global Foundation for Ocean Exploration. Emily currently resides in Bozeman, Montana

The foundation’s greatest asset is its team. Led by Dave Lovalvo, our core team of multi-disciplinary engineers, videographers, scientists and educators are committed to developing innovative and state-of-the-art exploration tools that will allow us to understand, interpret, and protect the world’s oceans.