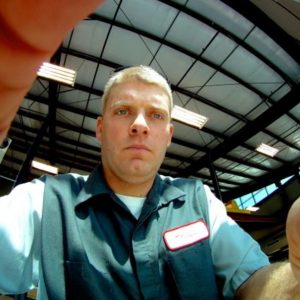 Webb Pinner has been working in support of oceanography for the last 10 years. Starting in as an ROV copilot on the 2004 Return to Titanic expedition, Webb has spent his career supporting ROV-based oceanographic research and exploration. Although he started as a pilot, his knowledge of data systems and acute awareness of how scientists interacted with technology altered his career path in to the budding realm of telepresence-enabled oceanography.

In 2005 Webb worked with NOAA’s Office of Ocean Exploration and Research (OER) as part of the original team responsible for outfitting NOAA’s only dedicated ocean exploration vessel, the Okeanos Explorer. For 8 years Webb served as the Telepresence Team Lead and was responsible for the design, deployment and operation of the vessel’s ground-breaking methods for conducting telepresence-enabled ocean exploration.

During Webb’s tenure at OER the telepresence-enabled oceanographic paradigm witnessed a number of milestones including the first international shore-based participation center in Jakarta, Indonesia, the first shore-based science team to exceed 100 active participants and the first daily public viewership to exceed 100,000 unique visitors.

In 2012 Webb started Capable Solutions, a small consulting company dedicated to helping other oceanographic institutes with data management and telepresence-related challenges. Named out of respect for his time aboard the Okeanos Explorer (formally the USNS Capable), Webb leveraged his experiences working for OER to help the broader oceanographic community as they began to embrace the telepresence paradigm. In late 2013 Webb left OER to work for Capable Solutions full-time but retains close ties with his former colleagues including GFOE founder and president, David Lovalvo.

Webb is a published author and co-author of scientific papers on the development and use of telepresence to conduct ocean science. His weblog OceanDataRat.org provides conceptual and in-depth technical articles related to oceanographic data management and telepresence-enabled ocean science. He started and remains the lead developer of OpenVDM, an open-source data management software suite designed specifically to assist oceanographic research vessels more efficiently manage and disseminate data.

Webb resides in southwestern Rhode Island where he is an avid surfer, kiteboarder and motorcyclist.

The foundation’s greatest asset is its team. Led by Dave Lovalvo, our core team of multi-disciplinary engineers, videographers, scientists and educators are committed to developing innovative and state-of-the-art exploration tools that will allow us to understand, interpret, and protect the world’s oceans. If you are interested in joining our team, please check here to view our current open positions.